Quiet falls over Malaysia, with residents in lockdown after last night of travel and dining out

January 13, 2021
The streets of Kuala Lumpur, Malaysia’s capital city, were empty on Wednesday morning – a far cry from the previous night’s hubbub as people scrambled to make preparations for a two-week lockdown to curb the spread of Covid-19.

Roads were packed before the order came into force at midnight on Tuesday, with Malaysians squeezing in one last dinner or drink against the backdrop of thousands of coronavirus cases. Others returned to their hometowns before a ban on interstate or even interdistrict travel took effect, or rushed to stock up on groceries despite government assurances of adequate supplies.

Some, however, just wanted to enjoy time with their families before they were separated.

“I went across town to spend time with my older brother and his girlfriend,” research analyst Harris Zainul said. “I wasn’t panicked or rushing out to buy anything, Malaysians should not only know but also appreciate better the fact that grocery stores will continue to be open and shelves stocked. We are better prepared after last year’s experience.”

Procurement analyst Jeremaiah Lazarus echoed this after his trip to Johor Bharu, a city in Malaysia’s southernmost state.

“I already stocked up on groceries last week, and I was concerned that most Malaysians would flock to supermarkets at the eleventh hour so I did not want to be in crowded places,” he said. “I am not so concerned as I work from home and I can still go out to get supplies. That said, my thoughts go out to those who can’t or those who will be affected by this.”

Malaysia’s previous nationwide lockdown, which started in March last year, succeeded in tamping down Covid-19 numbers until a third wave of infections spiralled out of control in September. With no signs of it abating, Prime Minister Muhyiddin Yassin on Monday announced lockdowns in most parts of the country.
Six regions – the wealthy and densely populated states of Johor, Selangor and Penang, as well as Kuala Lumpur, the administrative capital of Putrajaya and the federal territory of Labuan – are under a strict two-week lockdown. Residents in these areas are required to shelter in place and can only leave their homes to purchase food and necessities within a 10km radius, or for medical emergencies. Non-essential businesses will be shut, although places selling food can operate on a takeaway basis.

Citizens living in other states with fewer daily new cases will be subject to movement control orders (MCOs) as well, albeit of a less stringent nature.

The government had said this move was required because the nation’s health care system was “at breaking point”. It also announced a nationwide state of emergency that could last until August and will halt any political activities including convening parliament, although detractors have suggested this move had less to do with the pandemic and more with protecting Muhyiddin’s tenuous grip on power.

Although the prime minister had assured Malaysians the state of emergency was not military in nature and there would be no curfew, the Malaysian Communications and Multimedia Commission (MCMC) soon after issued a statement warning the public that it would monitor the spread of disinformation as well as statements deemed to touch on the sensitivity of the “3Rs” – royalty, religion and race. 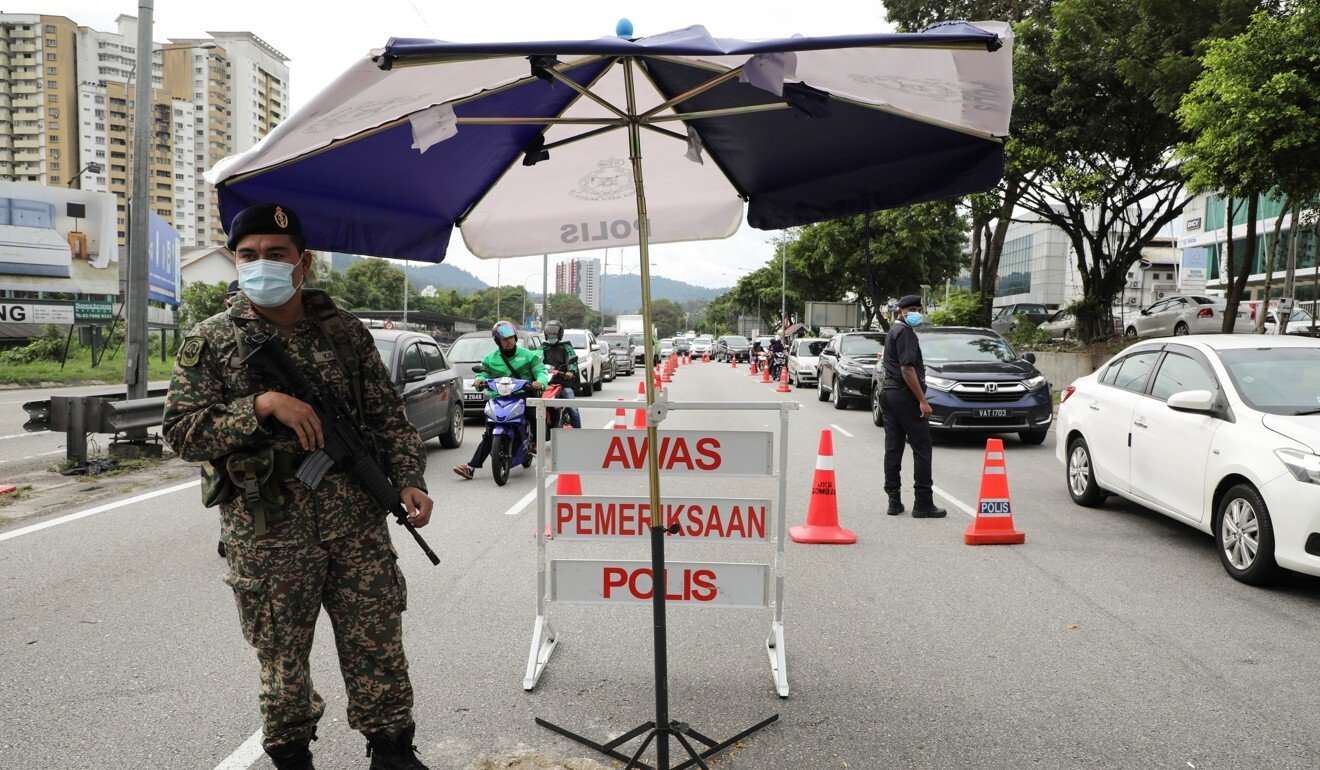 A soldier stands guard at a roadblock to enforce the lockdown in Kuala Lumpur. Photo: Reuters

The emergency declaration was criticised by opposition politicians and rights watchdogs such as the Centre for Independent Journalism, which said the MCMC statement “foretells a possibility that this emergency is likely to be used to justify arbitrary arrests and investigations that infringe on freedom of expression and other fundamental liberties”.

Although the lockdown was expected, the state of emergency was not, communications manager Erica Cheong said.

“Given all the uncertainties [surrounding the announcement] and the very real possibility of extensions, we prioritised the things we knew we could not do during the lockdown, such as wrapping up house renovations, returning borrowed books, getting a shorter-than-usual haircut, checking in on elderly parents and sneaking in a dine-in meal on the other side of town,” she said.

Cheong is aware that while she and her partner can rely on food-delivery services, have no dependents and her job allows her to work from home, not many share her good fortune.

The second lockdown has raised concerns over those in precarious economic conditions who will be unable to eke out a living while businesses are shut, particularly in states currently being ravaged by floods along Malaysia’s east coast. The Malaysian Health Coalition, a group of health care societies and professionals, urged the government to provide citizens with “adequate financial and mental health support during the movement control order”.

“The economic impact of [the second lockdown] will be more severe. We also fear that calls to suicide prevention and domestic violence hotlines will spike as they did during the first,” it said. “Besides that, floods in several states have impacted health care delivery and many households’ ability to safely self-isolate. The government must provide adequate resources to support all vulnerable residents of Malaysia.”

Meanwhile, three ministers and one deputy minister have tested positive for Covid-19, prompting mocking reactions on social media from Malaysians who view the ruling Perikatan Nasional administration with increasing discontent.